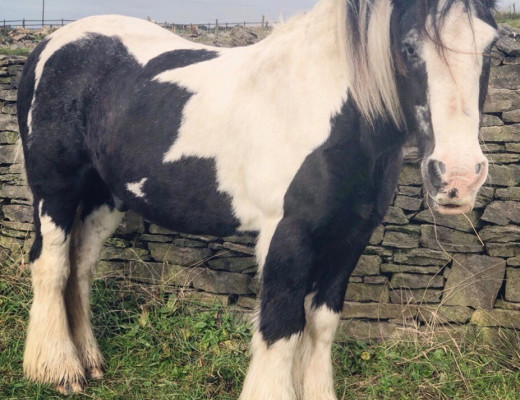 The first sign of Cushing’s that Tyson’s owner Jane noticed in her 24 year old cob was when he started growing a very thick dense coat. It wasn’t curly as Jane had thought a Cushing’s coat would be, and before this he had always been in good health. Soon after this he developed an eye ulcer which unfortunately resulted in him having his eye removed. Jane reports that he never really recovered from the operation: he lost weight, lost condition, became depressed and was far from the big round cob he had always been.

At this point his owners took the advice of their ‘wonderful vet’ who tested Tyson for Cushing’s – the test was positive and so he started daily medication to treat the condition. Unfortunately Tyson temporarily lost his appetite when he first started medication, but Jane persevered with lots of palatable feed and after he had been on treatment for around 8 weeks the difference was noticeable – he had gained weight, his condition was much improved, and his coat was smooth. By 12 weeks he was back to his old self, and he even came out of retirement and enjoyed some light hacking this summer!

Jane says “Amazing turn around for an old boy! I thought the outcome may have been a lot different if we hadn’t started the treatment. He gets a small daily hard feed with his medication and lots of good grass apart from that nothing different than the last ten years.”

The treatment for Equine Cushing’s disease is a prescription-only medicine, known as a POM-V, and can only be prescribed by your vet. This section of the website is provided as an information service for owners of horses who have been prescribed the POM-V medicine, Prascend® 1 mg tablets for horses, by their vet. Please click 'OK, I accept' to confirm that you are either a veterinary surgeon or an owner of a horse that has been prescribed Prascend by your vet.